The origin of the subject Series 1: Extrinsic and Intrinsic Motivation

I wanted to talk to coaches or those to whom coaching forms part of a regular modus operandi. Mentors, leaders, trainers, influencers, I’m talking about you…

Goals, goals, more goals, taking massive action, you are fabulous – and all of these utterances, do they help and are they real? Philosophers have been talking about extrinsic and intrinsic goals for years, and mainstream “coaching” has only just caught up with this. I say caught up, but what I mean is that the misunderstanding has already started. Knowledge regurgitation is rife, and people will utter things without true understanding. A test of true understanding is the ability to create knowledge rather than to copy it. This copying may take the form of regurgitating quotes without understanding their origin. Recently I heard an impressive coach speak publicly. He quoted Francis of Assisi as Stephen Covey! The error may have been his, or perhaps, there was plagariasation afoot! Either way, this halfway approach to knowledge can be dangerous, especially when you are self-styling as a guru/coach/influencer. Social media has created an environment where ANYONE can pretend to be these things. They no longer need to earn the right through discipline, acquisition of knowledge, chrystalisation of said knowledge – and ultimately through the power of their mind! 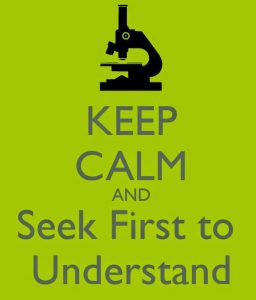 Seek first to understand – then to be understood did not originate within habit number 5 (with a superfluous unenforceable copyright), it can be attributed to Francis of Assisi: “Grant that I may not so much seek to be understood, as to understand…”
From the “Prayer of St. Francis” of Assisi (b. 1182; d. 1226)

The debate on whether or not this constitutes as plagiarism, is for another day, but the concept of blindly following “inspirational quotes, metaphors and memes” is part of the lazy acquisition of second, third and fourth hand “photocopied” knowledge. To to me, it is the same as never painting anything, hanging a bad photocopy of a Rembrandt on your study wall and thinking that you are now an accomplished art critic! You can create a website, start blogging and pretend all you want!

Teleology or finality as concepts are fascinating. Telos (from the Greek: end/goal/purpose) and logos (from the Greek: reason/explanation/purpose/study). Philosophically it is the concept of meaning relating to purpose and purpose relating to meaning. It considers the intrinsic and extrinsic purpose of things. For example, a human creates a fork and its purpose seems clear and extrinsic inasmuch as it is imposed. Or, did the metal want to become a fork?

Aristotle claimed that an acorn’s intrinsic telos is to become a fully grown oak tree. When we consider Maslow’s theory of self actualisation, namely that where obstacles are removed – we will all become whatever were meant to be, you can see the philosophical influences at work within the construction of the theory. Many people would wrongly think that Maslow was the original source of this concept, that is, unless they read Greek Philosophy…

This brings us on to meaning, and that simple yet powerful word – why…

Staying with Aristotle, the “four causes” are elements of an influential principle in Aristotelian thought whereby explanations of change or movement are classified into four fundamental types of answer to the question “why?”. Aristotle wrote that “we do not have knowledge of a thing until we have grasped its why, that is to say, its cause.” While there are cases where identifying a “cause” is difficult, or in which “causes” might merge, Aristotle held that his four “causes” provided an analytical scheme of general applicability.

The four causes (Aitia) from the greek (excerpt)

So the moral of the story.

For those seeking greater notoriety than the greatest of them. As to the new gods of social media, take stock of the old gods of the old world and the old masters’. Knowledge and original knowledge are as to night and day. Follow not, lead not, but rather journey within…

“Knowledge before power and power before fame. Fame before the fall and deeds all that remain”… (Corke Erece)

The Positive Psychology Guild is launching a brand new independant accreditation service for training providers who...

Fear is terrifying! Fear serves a vital purpose, and can be an incredible motivator. The motivational...

What It’s Like Being Autistic: Courage and Autism – A Walk Through Fear Towards Hope

Autism explained - it may not be as you think... I would like to take you...

A talk about fear and how it operates within high perceived risk situations such as self...